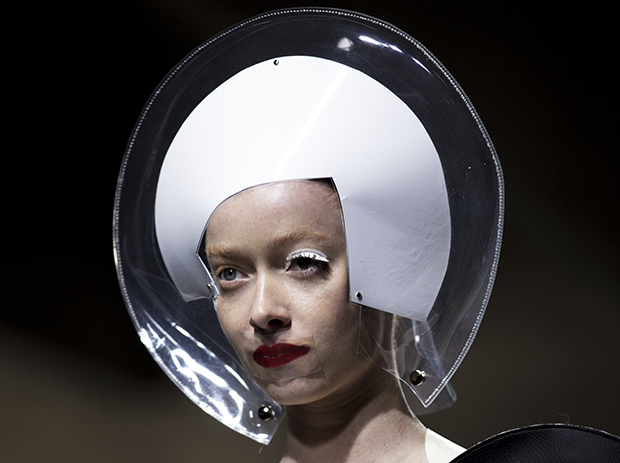 Do not try this at home ! , but if you are a fashion editor, movie stylist, art director, advertising mogul, take a look to the future, take a trip beyond space odyssey because JUNYA WATANABE took off, and long time ago, and you don´t want to be left behind.

This extreme beauty counts with a sublime touch, a very much poetic and epic side to it. There is a simplicity that controls the look, but rather out here, the understated look for the  future beyond. There is glamour of the red lips in all the girls, but rather frenetic and physcotic, the designer decided to place a huge piece of scotch tape across the lips, the result is mega frustrating  yet highly visual. 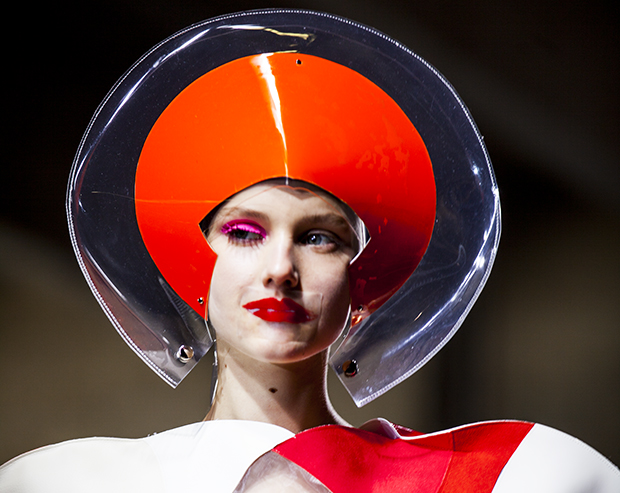 The looks are almost the same , just a little variation on the eye, either with color, either the left or right eye, maybe a humongous lash coloured in the least expected shade of a fluo or bright orange, maybe light blue or green. Out of context , the beauty of this is that is definitely taking us to the unknown, creating the beauty mood board of the next century, if you want to go that far. 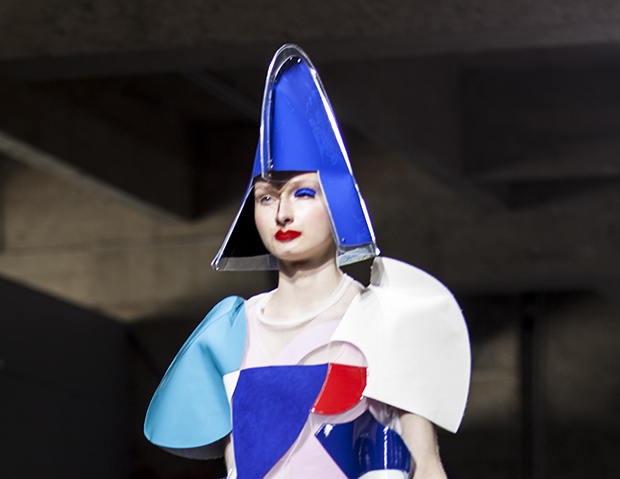 The hats had an enormous impact in how the beauty was presented, they are fifty per cent of the high impact of the runway looks. The girls did not lose their personality , in fact , they became the versions of themselves in a near or far future. There is an element of geometry that performs in every aspect of this collection which is extremely and severely over the top. 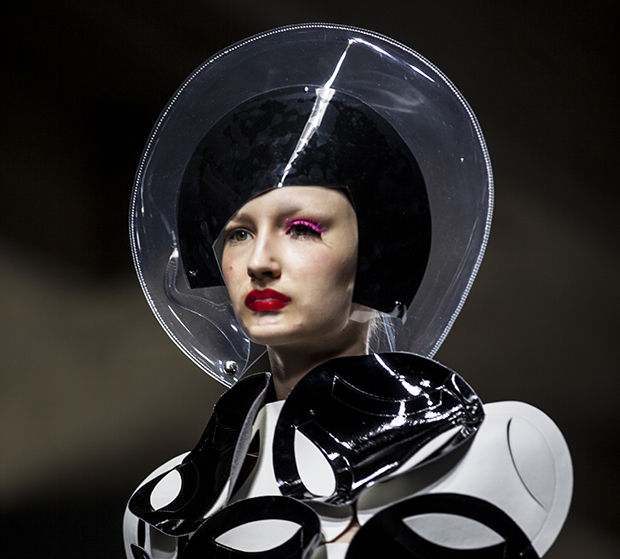 The connection , the element that connects this beauty story made runway is the straight forward lipstick application , which is the red lipstick covered by a transparent scotch tape that creates a glossy effect around the lips and chin. The hats make a connection between each other , resembling fish tanks , or the future version of a bird, half cartoonish , half futuristic. 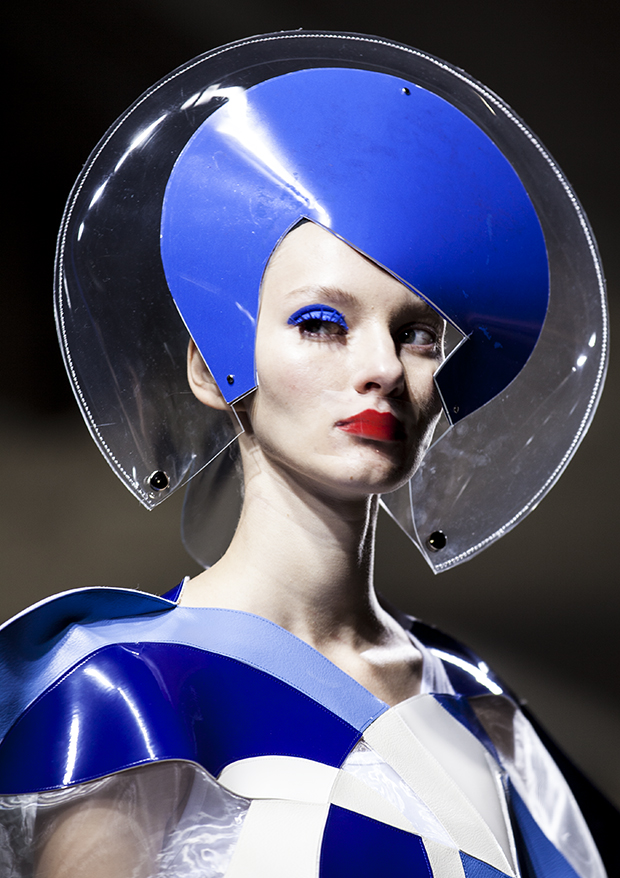 Thi will be the glamorous character , the sexy version of this plastified dream that becomes true, live on the JUNYA WATANABE runway, exquisite shades of electric blue and light blue blend together on a  wide spread of white. The blue in the lashes makes the feminine touch to this futuristic dolls. 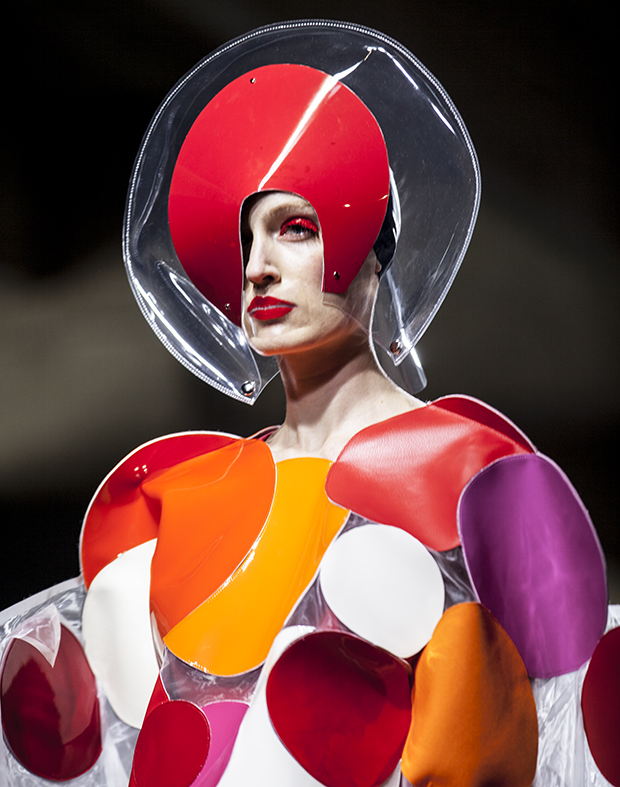 Modernity went beyond with this total red loom, glossy red applied over the lids, and a matte lipstick, mattyfied by a matte scotch tape in the clearest shade. The result is very seventies, very airline advertising from a funky mid-seventies airline , let´s say Braniff International, just to name an example. 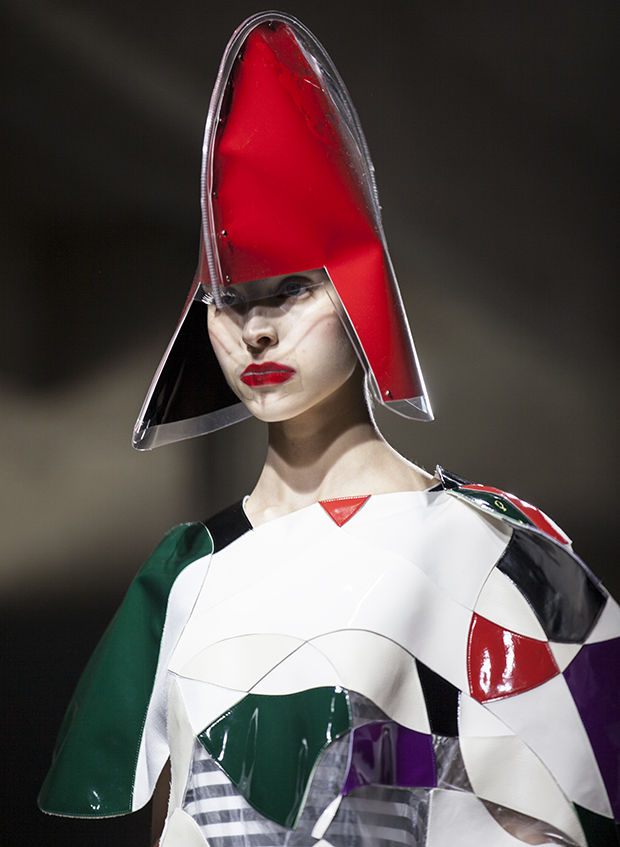 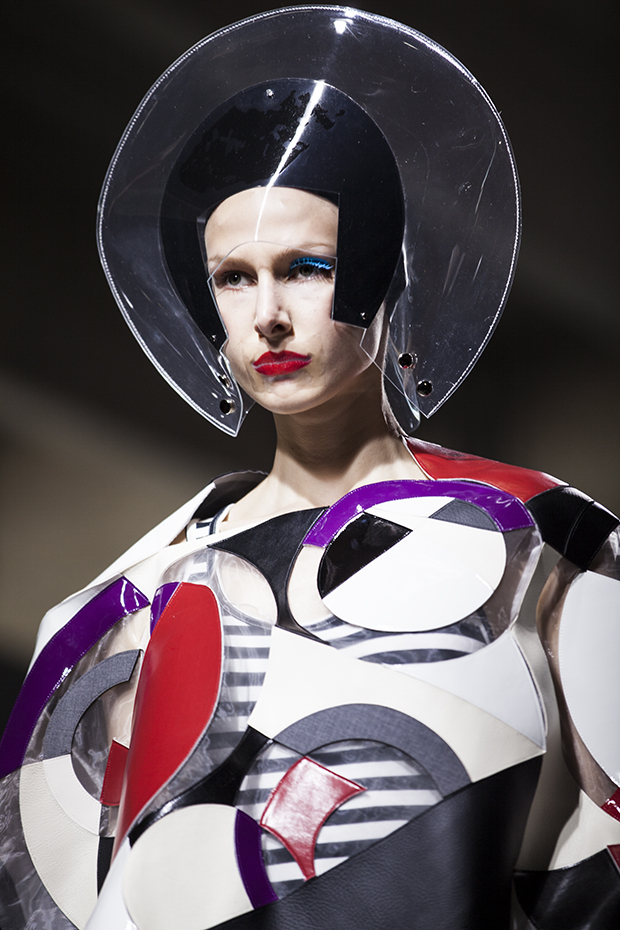 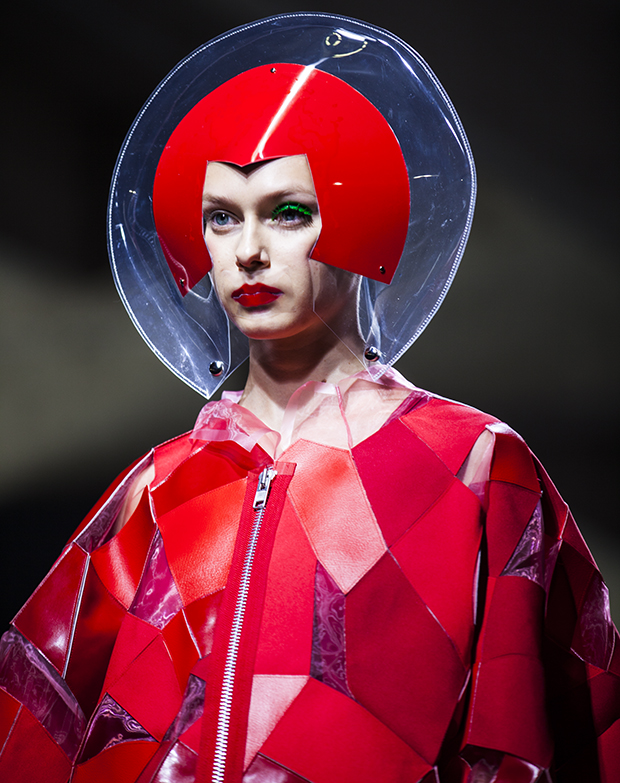 To make the long story short, and to make it wearable in real life , if it is your dream , just pick your favourite coloured mascara, and apply it all over your top lashes , making an impact in your eyes, there is a very chic element to the coloured mascaras , they look great when they are worn alone, just a nice complexion , and a touch of color will make the look. Remember, this is a fashion show , and a fashion show was created to make an impact , to surprised audiences, to inspire tired editors, and to inject modernity into fashion buyers. You don´t have to replicate the look to go to dinner.